Let’s not get carried away. If you’re reading this, it’s likely you were working flexibly for a long time before lockdown. It’s just that we’ve now experienced a more extreme version of it.

So the real question is: what does flexible mean now? After all, being stuck at home is hardly flexible. It was called lockdown for a reason.

As everyone begins to look to the future, we’ve come up with a list of points to consider as you work out how things might change more permanently for you.

Because there’s no doubt that something has clicked round in the psyche of many of the UK’s business leaders. Some substantial change is on the way.

For a start, the stats tell an interesting story:

In the end, the basics of common sense management have to apply. If your organisation can function more efficiently, productively and profitably with people working even more flexibly than they were, then it’s an obvious logical step to make a permanent change.

Already, the term ‘hybrid’ has moved into mainstream discussions about ways of working. Right now, there appears to be a consensus around a model where people come and go to the office according to the needs of the task in hand.

This hybrid approach has been common practice for many organisations for a while. It’s the scale of the change that makes it such a hot topic at the moment.

In particular, it’s the impact on the IT infrastructure that is sparking a lot of debate.

Lockdown happened at such speed that many organisations had to piece together a make-do infrastructure that helped keep things running. Now that the hybrid approach seems to be becoming the norm, it’s time to invest properly in the technology that makes it work most effectively. 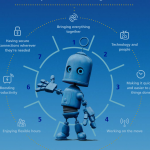 The economics can make a lot of sense. The savings you make on travel costs, heat, light and other operational expenses can release funds for investment in the technology you need.

In the longer term, downsizing your office space could release even more cash for investment, or just to boost the bottom line.

One of the reasons we are working with O2 is that they’ve always been champions of more flexible ways of working. They see the benefits for themselves through the loyalty and motivation of their people, their impact on the environment and, most of all, the delight of their customers.

That’s why so many organisations are making flexibility an immediate priority. When employees, finance teams and customers are all happy, the business case speaks for itself.

For more ideas on how to build flexibility into your business and to see how this can help you adapt to change, download our Solutions for changing times eGuide.

How to build flexibility into your mobile estate
1st February 2021